This week’s post brought to you courtesy of my great friends Kevin and Troy.  They’ve had a few marketing doozies thrown their way recently and they’re starting to pick up on poor decisions made by marketers and have shared them with me.

For some reason Southwest Airlines really, really, really wants them to get their frequent flyer miles credit card.  They received all this mail (minus the first one they threw away)  in a two week period.  Also in this picture are copies of Family Circle and Better Homes & Gardens and they have no idea why they’ve been getting them for years.  Shouldn’t these advertising dollars get in different people’s hands where they could affect purchase behavior?  I can guarantee neither of them has ever perused the Family Circle, but maybe the BH&G a couple of times.  Maybe. 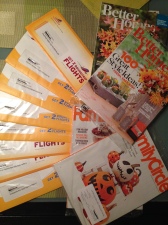 We then got on the conversation of a new friend who sells cars and Troy said he would never buy American.  I asked his reasoning.  He had a few points, but the one I agree with the most is that some of them are trying too hard when they used to not try at all.  For instance, one of Ford’s slogans is “If you haven’t looked at a Ford lately, look again,” which technically means, “we know you’ve given up on us before, but pretty please check us out now because we’ve changed and actually are building cars you want.”  That level of plea just turns Troy off to receiving their message.  (Disclaimer: I actually have a Ford and love it – recalls, glitches and all.)

This started making me think of some other Marketing Mehs that I want to share. First, I came across one at The Festival of Bacon this weekend.  The picture below shows a great free pretzel booth, but no one is in line.  The rule for all of the free marketers was that they could only be handing out free stuff every other half hour.  And then in the off half hour they literally had to shoo people away from their table saying to come back in a little while.  I felt sorry for the poor people who had to turn the bacon-buzzed, salt-craving consumers away all the while hoarding boxes and boxes of product they couldn’t pass out.  I know the festival was trying to get more people to buy the wonderful bacony-goodness foods from the vendors that sold it, but there should have been a better way to handle the freebie booths. 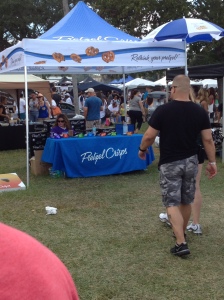 The last recent Marketing Meh I’ve seen is Burger King “changing” its name to Fries King.  Adweek said it best: “Between the French Fry Burger and the new Satisfries, Burger King has been really into fries lately. Now, the chain is taking this obsession a step further by pretending to change its name to Fries King—and posting a load of photos to Facebook showing the unveiling of a new corporate identity. There are a few downsides to this. First, it implies the burgers are probably not very good. And second, it confuses people—many of whom on Twitter clearly don’t know how to respond. On the plus side, it does appear to be making people hungry.”

Have you been victim to any Marketing Mehs lately?

1 thought on “Some Marketing Mehs”