So I’ve been MIA because I had only written enough blogs to get me back from Peru… and when I got back I was recuperating from Peru for this long!  Hiking the Incan Trail was the most challenging thing I have ever done.  I probably wouldn’t do it again, but it was a memorable experience.  The views were spectacular and the people were amazing.  I took LOTS of pictures (and one of my best friends, Troy Thomas took a lot, too – many of the ones below were taken by him, by the way).  And, of course, being the Media Nerd that I am, I took LOTS of pictures of advertisements.  I couldn’t help myself.  Most were very vibrant and they all spoke different stories to me about what audiences they were trying to reach.  And so, I would like to share them with you.

Arriving at the Cusco airport.

This was actually the second Welcome to Peru sign, but the first one was on an escalator and it was impossible to pull the camera out fast enough.  Believe it or not, we actually saw a guy in the Lima airport who was kind of dressed like this, with the exception that his cheeks and lower face were all completely red.  He was just chillin’ at the terminal waiting for his flight and he pulled out his pan-flute.  Some people were taking pictures with him, but I kind of felt like he was a Disney character off duty.  You just do not disturb. 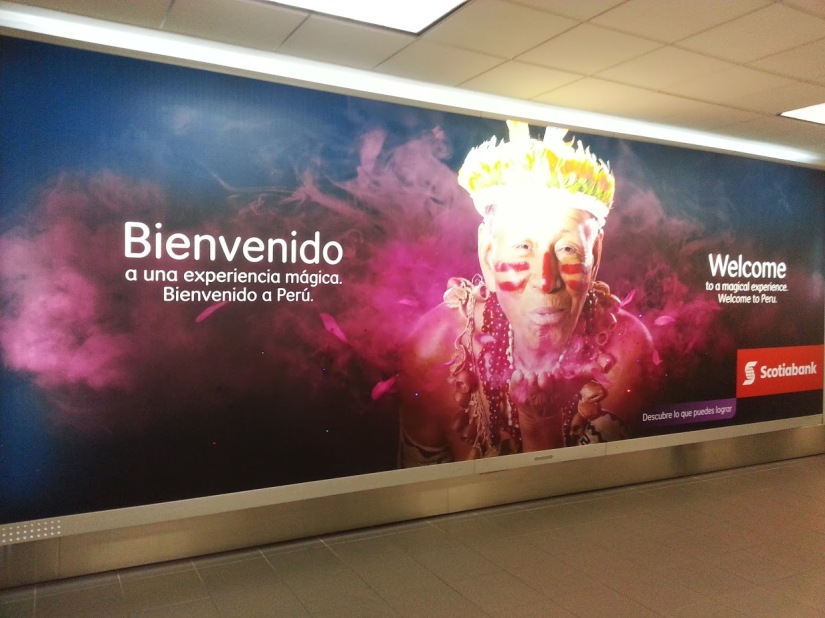 We got very excited looking at this train knowing that we’d be riding it back from Machu Picchu after our long trek.  Of course, it would be after nightfall so we wouldn’t actually get to see anything.  So we took this pic to remind us of what would be out there.

Waiting for our bags at the wrong belt, I had plenty of time to look at the ads around me.  All were for very high-end brands. 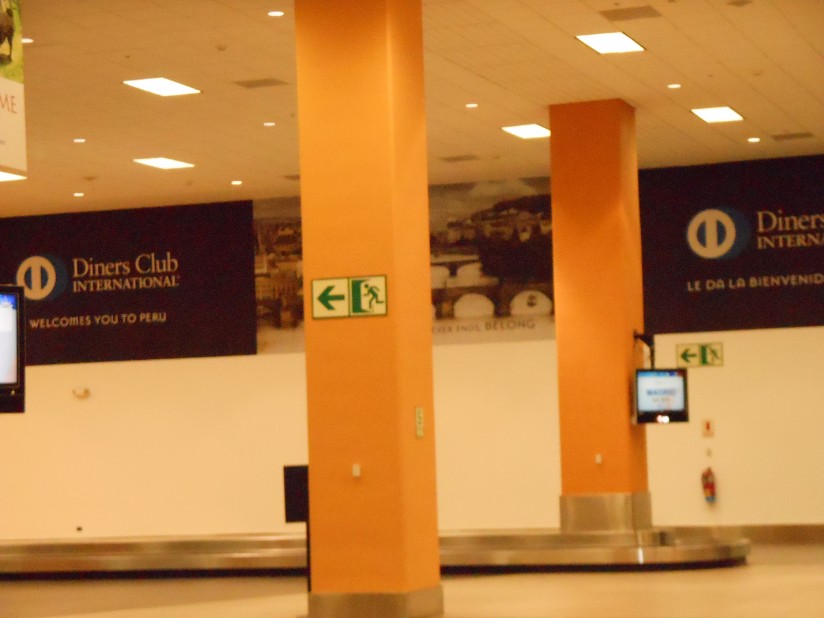 After finishing with customs we came upon these two beautiful boards.  The first is beautiful because I really like the new Star Trek actors and the second one because, well, it’s just so pretty.  Of course, it’s for smoking, which makes it uncool, but I’m glad they’re blatant with their warning label.

Lastly, this was our first experience with “the most pushy salespeople in the world,” as I’m calling them.  She actually tried to climb on our bus, but the guide wasn’t having it.  And even though we were trying to ignore her she was listing out everything she had on her head and and her basket.  Their sales tactics for restaurants and massage parlors were very interesting (and pushy), too.

In order to not picture overload you in one shot, I’ll save the “wandering around Cusco brands,” the “if Disney saw this they’d freak” creative, and the “Coca-Cola doesn’t own everything?” discovery for another time.